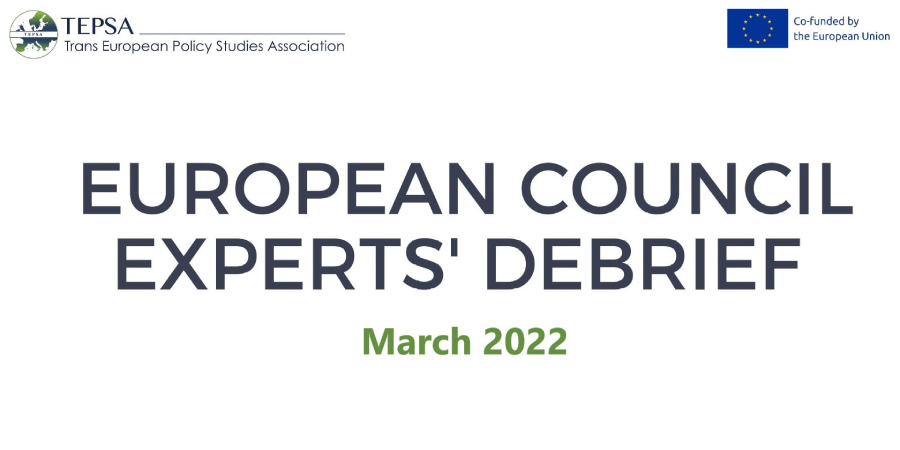 The EUCO Debrief is a series of policy responses to the regularly-published conclusions of the European Council. Each time the European Council meets for a summit, TEPSA gathers its leading academics to comment on the conclusions, analyze the alliances formed, maintained, and broken, investigate the policy implications of the consensuses reached, and prescribe solutions to move Europe forward.

In this issue, PMC RC, specifically its researchers Elene Panchulidze and Irakli Sirbiladze, focused on the topic of the EU membership applications of Ukraine, Moldova, and Georgia, while Giorgi Tsulaia (Junior Researcher) and Anastasia Chkhenkeli (Research Assistant) discussed the EU’s sanctions imposed on Russia, as well as pondering which other sanctions the EU could apply in the future.

While the European Council has requested that the Commission examine the membership application of Ukraine, Moldova, and Georgia, Panchulidze and Sirbiladze discussed if the EU’s eastern enlargement is a genuine possibility and what the potential geopolitical consequences could be thereof. They also focused on how this could affect its relations with long-standing candidate members, such as those in the Balkans.

“Looking to the future, one possible scenario for the EU is to adopt the Western Balkans toolkit vis-à-vis the three associated states and grant them ‘potential candidate’ status. This would mean the acknowledgement of a clear European perspective, but also sending a signal to the associated partners that candidate status and eventual membership are only possible when EU values are actually shared by those countries. To progress to the next stage, the EU fundamentals of the rule of law, functioning democratic institutions, public administration, and economic reforms must be upheld with the association process still the common framework for relations. While there is no fast-track procedure defined in the treaties, the EU can nevertheless show some flexibility and consider the model of staged accession in response to the ongoing geopolitical developments and the growing number of states in the membership “waiting room”,” noted the authors in their contribution.

As the EU remains ready to close loopholes and target actual and possible circumvention, as well as to move quickly with further sanctions, Tsulaia and Chkhenkeli focused their discussion regarding the EU’s sanctions imposed against Russia on the overview of existing loopholes therein and propose further forms of sanctions.

“While imposing full-scale energy sanctions and fully banning energy imports from Russia to the EU is debatable due to the EU’s high dependency on Russian oil and gas, there is a possibility to strengthen the already-imposed sanctions by lifting energy-related exemptions.”

“The decision of whether to expand or not, and in which directions to do so, depends on the exact objective of those sanctions. Since the first sanctions were triggered, they have considerably damaged Russia’s economy and its international reputation. The continuing effectiveness of the sanctions thus depends on the strategy behind them. The imposition of sanctions should thus take into consideration whether this strategy is designed to exhaust the Russian economy so much that it would no longer be able to support the war effort, and whether they will shift public opinion in Russia against its government, or just punish Russia and its citizens without any room for reversibility,” observed Tsulaia and Chkhenkeli.