Support to PFM Reform in Egypt

In recent years, Egypt has succeeded in establishing a macro-fiscal environment, during which time good progress has been made on budget consolidation, leading to more sustainable public finances.

Nonetheless, the COVID-19 pandemic and containing measures taken by the Egyptian government will have long-lasting consequences including fiscal consolidation and macroeconomic aggregates. The pandemic, in addition, will exacerbate the already high level of public debt and large financing needs in the country. The EU Delegation is providing extensive support to the Government of Egypt through different forms of aid. The provision of development cooperation requires regular monitoring through government policies and legislation in different domains of the fiscal situation (general and sector budget analysis, budget execution, budget transparency, budget comprehensiveness, revenue analysis, etc.) of public financial management (PFM) and of the macro-economic environment.

During 2019, the EU has deepened its PFM dialogue with the Ministry of Finance (MoF)of Egypt , which culminated with the finalization of a comprehensive package supporting public administration reform and PFM. The PFM component is expected to stimulate the implementation of medium-term PFM priorities, which requires, inter alia, the design of a program-based budget, the full architecture and governance of risk management, institutional capacity-building, and continued policy dialogue. This action, which is part of the Annual Action Plan 2019, will be launched in the near future. Other key international organizations and donors active in supporting the PFM reform process in Egypt are the IMF, IMF METAC, the World Bank, USAID, OECD, and OECD-SIGMA.

In this context, the overall objective of the assignment is to contribute to the PFM reform process undertaken by the Government and MoF of Egypt, taking into account the post-COVID fiscal context.

Specifically, the project is to support the Government of Egypt, and specifically the MoF and its affiliated entities in the path towards further reforming the PFM system as well as to support the EU Delegation on: (i) assessing the PFM reform in Egypt; (ii) updating the PFM annual monitoring reports; and (iii) drafting the Terms of Reference (ToR) of an upcoming EU action supporting PFM.

PMCG is implementing an EU-funded project in consortium with ICE – International Consulting Expertise entitled “Improving quality of Prosecution and Criminal Investigation." The project aims to assist  in advancing the reforms of the Prosecutor’s Office and the Ministry of Internal Affairs (MIA) of Georgia in line with international standards and commitments. In the course of the project, we have helped to deepen the knowledge and skills of employees of the Analytical Unit of the Prosecutor’s Office of Georgia in their daily integral work on analytical data processing and improving published information to prepare materials and reports in a dynamic and interactive manner, using modern tools and methodologies.

With the purpose of enhancing good governance and sustainable development in the municipalities of Georgia, on February 1-5, together with the National Association of Local Authorities of Georgia (NALAG), we conducted an online training course for 168 representatives from all municipalities of Georgia, in order to introduce the concept of the Performance Monitoring and Evaluation System (PMES) as well as the application of the corresponding informational platform software, ensuring better measurement of the municipalities’ effectiveness, under the EU-funded project entitled “Networking for Efficiency and Development (N4ED).”

We recently started a new project, the goal of which is to advance e-work market development in Georgia by assessing the e-work market demand among enterprises from the five biggest cities of Georgia, and helping to match this demand with the rural labor force of the selected municipalities under the EU-funded program “Improving Rural Development in Georgia (IRDG),” which is being implemented by UNDP.

Join Us for the ICGFM Global Virtual Symposium: Budgeting in the Uncertain Times of Covid-19

The International Consortium on Governmental Financial Management (ICGFM), a leading global public financial management (PFM) organization uniting government entities, institutions, professional associations, university departments and high-level financial management professionals devoted to improving financial management, has organized a virtual training symposium entitled “Managing Through Crisis: COVID-19 and Governance,” which will take place on February 9-10. As part of the symposium, Mr. Aleksi Aleksishvili, CEO and Chairman at PMCG, will moderate the panel entitled “Budgeting in Uncertain Times,” which will bring together panelists from North America, Africa, the Caucasus, and the Balkans.

We are proud to share that our affiliated consultant of many years, Mr. David Lelashvili, has published Understanding Development: How do Countries Develop?, a book that investigates development as a whole, the prospects of less-developed countries modernizing, the best paths for countries to take towards development, and the ways in which traditional societies evolve into more advanced societies of the type found in modern and developed countries. 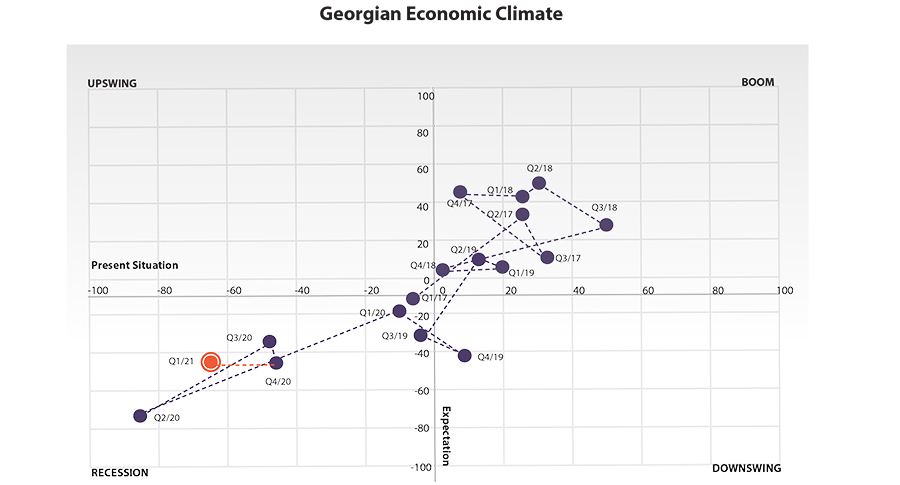 According to a survey of Georgian economists, the economic climate in the country for the first quarter of 2021 has been and will continue to be worse than the last quarter of 2020. Their assessment of the current situation was also significantly worse than the corresponding quarter of the previous year. The economists’ predictions for Georgia’s economic situation for the next six months were also negative. Specifically, their expectations for this period remain similarly bleak to those stated in the final quarter of 2020, and were considerably more pessimistic than the forecasts they made at the same time last year. 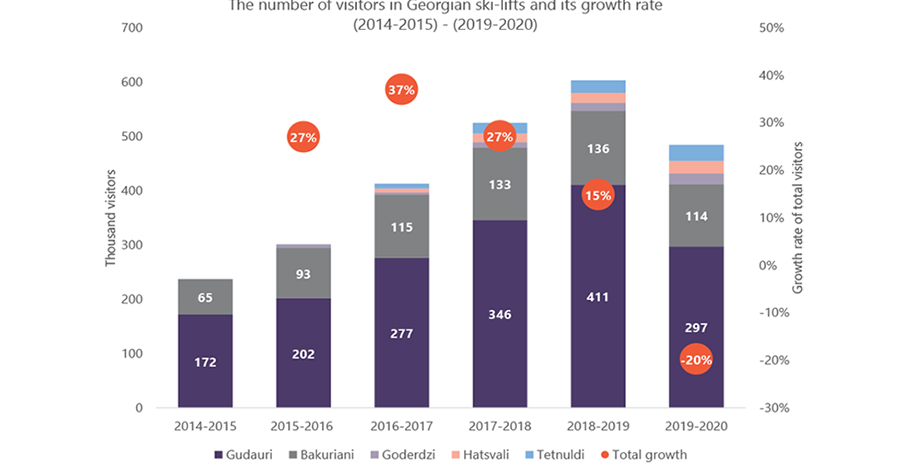 The number of international travelers declined by 94.5% in January compared to the same period of 2020, while the number of international visitors fell by 93.6% and the number of international tourists fell by 91.9%; In January 2021, the year over year Hotel Price Index decreased by 33.8% in Adjara and by 28.5% in Samtskhe-Javakheti; The number of ski-lift users in Georgia grew significantly, by an annual average rate of 21%, from the 2014-2015 season up to and including the 2018-2019 season. However, compared to the 2018-19 season, the number of ski-lift users dropped by 20% during the 2019-2020 season, due to the looming COVID-19 pandemic which effectively brought the season to an early finish. Thereafter, the 2020-2021 season has been cancelled outright due to the ongoing epidemiological crisis; Sales per skiing day demonstrated significant growth from the 2014-2015 winter season up to and including the 2018-2019 winter season, growing by 33% annually on average in this period. It even registered modest growth (4%) in the 2019-2020 season. In this issue, we overview trends in Ukraine’s labor market indicators through the past decade and compare the dynamics of unemployment rates of Eastern Partnership countries over the same period. In addition, we analyze the effects of COVID-19 on the key labor market indicators, as well as on average wages and number of vacancies posted in 2020.