PMCG, as part of an international consortium led by B&S Europe, will begin implementation of a new EU-funded project entitled “EU for Freedom of Expression: Alignment of National Media Legislation with the EU Acquis and Media Standards” in North Macedonia.

The project has an expected duration of one year and aims to engender a legal environment that promotes freedom of expression, competitiveness, and sustainability of the media market through the harmonization of national media legislation with the Audiovisual Media Services Directive (EU)2018/1808. The project also aims to harmonize the national media legislation with the EU regulatory framework, to promote freedom of expression and media pluralism across the whole media environment, to achieve greater competitiveness and sustainability of the media market, and to strengthen the socio-economic position and labor rights of journalists.

Throughout the project’s implementation, a team of experts will revise the media legislation and ensure its harmonization with the Audiovisual Media Services Directive (EU)2018/1808. The team will analyze the media market and the legal framework with respect to competitiveness. Furthermore, the experts will assess the extent to which the legal framework protects journalists’ social and labor rights.

"This project will contribute to filling the gap in the media sector vis-à-vis the need for systematic reforms in North Macedonia and ensure further alignment with European legal standards for the media. The expected impact is not only to make amendments to crucial laws relevant to the media community. It should go well beyond that. The presumption is also that mutual consultation will raise awareness about decision-making factors and other essential interlocutors. Pertinently, the freedom of expression and the independence of media, together with the economic and physical safety of journalists, are preconditions for a prosperous country," said Dragan Sekulovski, consultant engaged in the project.

The EU has been monitoring and supporting the process of developing media policies in North Macedonia and supporting the harmonization of its national legislation with the EU acquis for more than two decades. In addition, through various financial support instruments, the European Commission has worked to strengthen the capacity of relevant institutions, as well as regulatory and self-regulatory bodies. Some of the most important examples of the EU’s engagement and support in these regards are: regularly monitoring the process of harmonizing the national legal framework and its implementation in annual reports; assigning and providing experts through the TAIEX instrument and the first Strategy for Development of Broadcasting Activity; strengthening institutions through the Instrument for Pre-Accession Assistance (IPA); and supporting the role of civil society organizations (CSOs) in the media reform processes, through the European Instrument for Democracy and Human Rights (EIDHR).

Strengthening Urban Rural Linkages in the Autonomous Republic of Ajara

On June 14, we conducted a conference as part of the project entitled “Strengthening Urban Rural Linkages in the Autonomous Republic of Ajara” during which we presented the activities implemented and the rural-urban partnerships established in the course of the project.

On June 2, we, in partnership with the Vocational Skills Agency and with the support of the USAID Economic Governance Program, officially launched a public-private partnership (PPP) platform in information and communications technology (ICT), aimed at addressing the skills mismatch in the sector.

Supporting the Revenue Service to Digitize its Tax and Customs System

We in association with Leavingstone recently started working on a new project aimed at establishing a unified tax and customs methodological platform to help Georgia maintain a favorable and efficient tax system, trusted by the business sector.

On May 26, we participated in the Society for International Development – Washington (SID-W) 2022 Annual Conference, which was focused on the theme of “Inclusive Development: A Healthy, Prosperous, & Resilient Planet for All.” 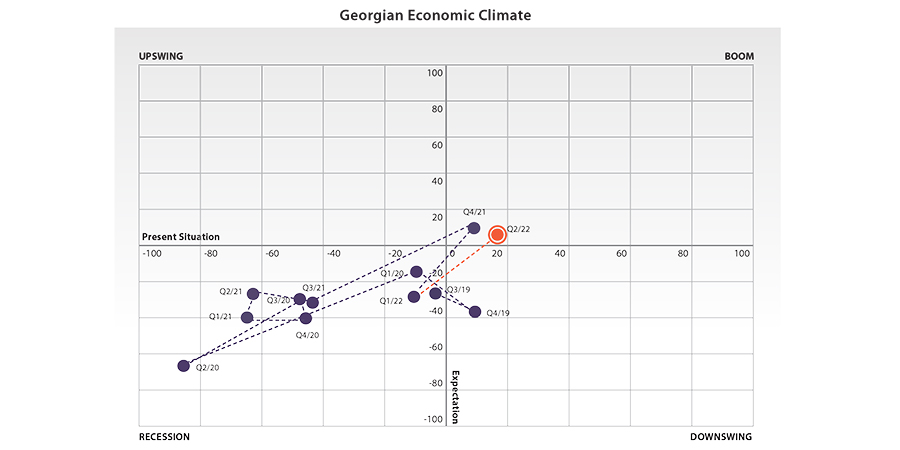 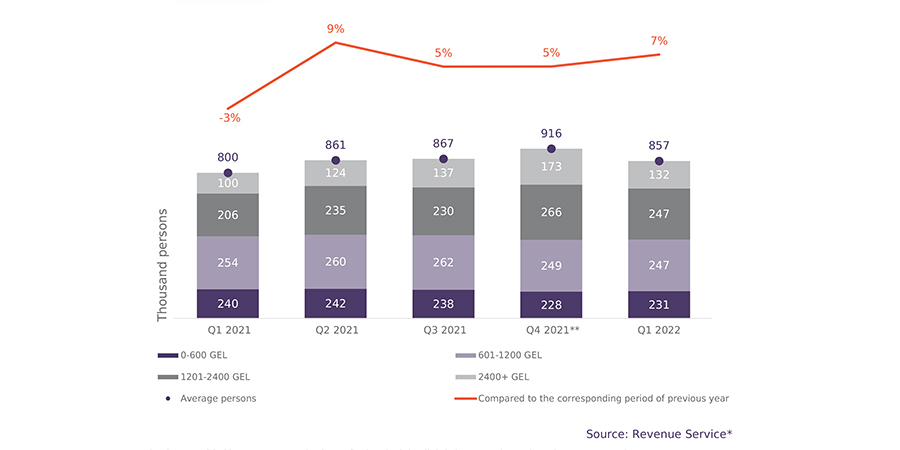 As Georgia struggles to overcome various social and economic problems, pensions remain among the country’s central issues. For many years, Georgia’s pension system had comprised only a state pension based on a solidarity principle. However, the state pension had not been sufficient to allow retired persons to maintain acceptable living standards. Therefore, pension system reform was a topic of hot discussion for a long time in Georgia and pertinently, in 2018, a funded pension scheme was integrated into the pension system. The following bulletin will review the key changes that have taken place in the pension system over the last five years. 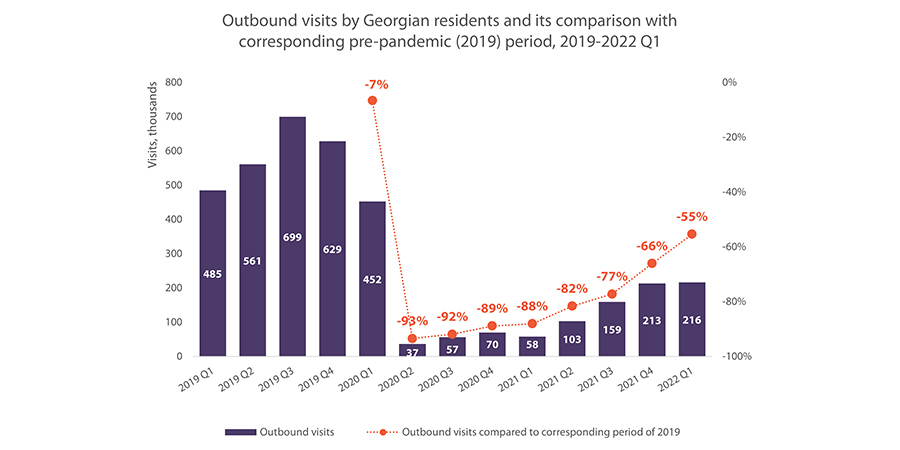 • Following the easing of travel restrictions by many countries, the outbound international visits by residents of Georgia have shown a significant recovery, reaching almost half of the pre-pandemic level by Q1 2022.• The main destination for outbound Georgian visitors was Turkey, followed by Russia, Armenia, and EU countries. • In Q1 2022, the expenditure of outbound visitors reached GEL 285 mln, which is 14% lower compared to Q1 2020, and 21% lower compared to Q1 2019. 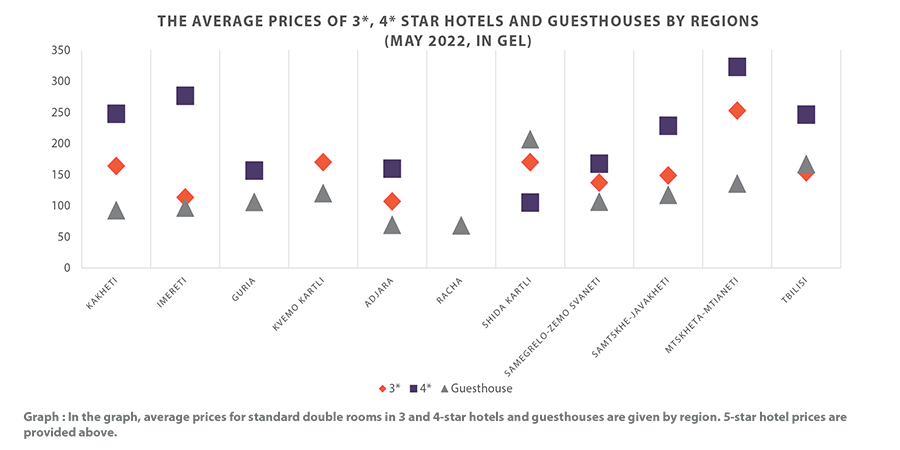 This annual report provides an analysis of economic trends, as well as denoting the challenges and opportunities (in local, regional, and global contexts) across selected value chains within six sectors to improve evidence-based decision-making through the provision of quality information and analytics. The specific sectors are tourism, creative industries, light manufacturing, shared intellectual services, waste management and recycling, along with cross-cutting sectors. The analysis tracks trends of 2021.

Issue 136: The Roles of Russia and Ukraine in Georgia’s Food and Energy Security 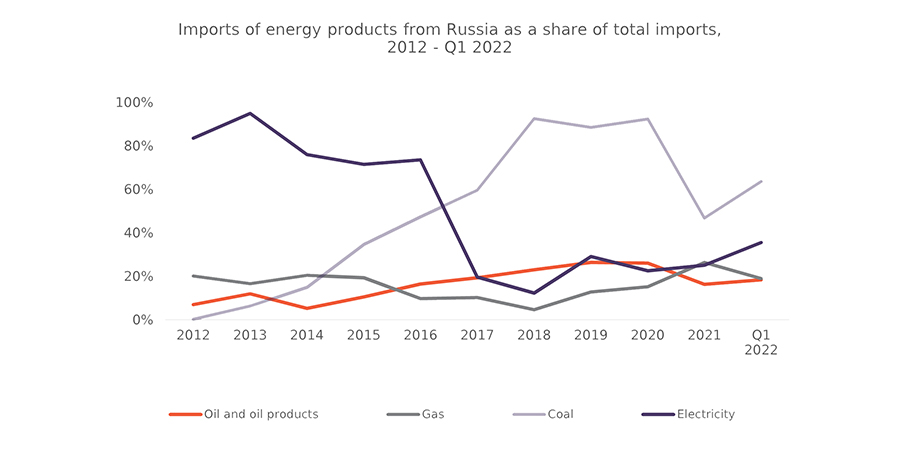 PMC RC stands firmly with Ukraine, supports its sovereignty and territorial integrity, and condemns Russia’s ongoing military aggression. While the most devastating outcome of this war is the humanitarian catastrophe in Ukraine and the destroyed lives of people, it is also essential to discuss the consequences of this war on the global economy. Georgia lacks its own production and is highly dependent on imports of essential food and energy goods. Considering Russia and Ukraine are prominent players in the global trade of food and agricultural products, while Russia is one of the world’s largest exporters of energy products, in this bulletin, we discuss threats to the food and energy security of Georgia amid Russia-Ukraine War. 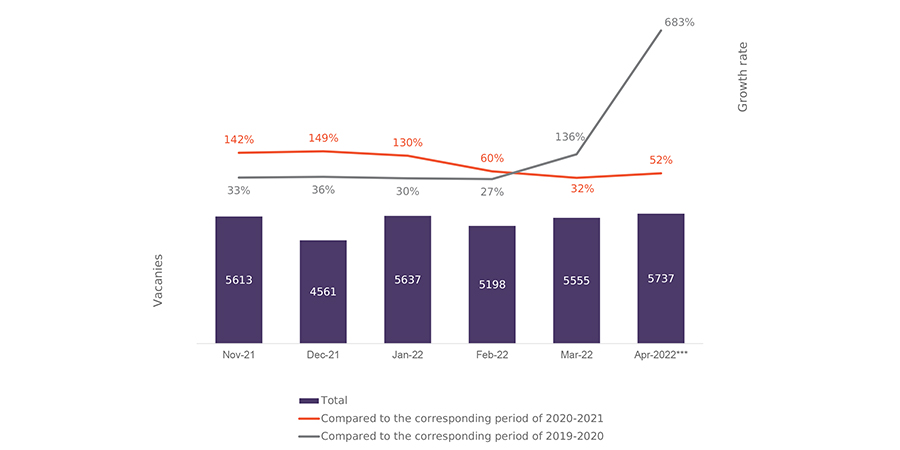