On November 10, Aleksi Aleksishvili, PMCG’s Chairman and CEO, participated as a panelist in an introductory event for the United States Agency for International Development (USAID) project -  ReforMeter - organized by The International School of Economics at Tbilisi State University Policy Institute (ISET-PI), and implemented by Deloitte Consulting.

On November 12, we conducted a Connective Cities Series virtual exchange on Municipal Response to COVID-19, devoted to exploring municipal measures and initiatives taken to address the COVID-19 crisis, as part of the German Agency for International Cooperation (GIZ) project “The Development of COVID-19 Recovery Solutions at Municipal Level in the Areas of Digitalization and Crisis Management in the Southeast European Region.”

PMC Research Center recently started working on new research under the project “Sustainable and Socially Acceptable Labour Migration Management” being implemented by the University of Applied Sciences Bonn-Rhein-Sieg (H-BRS) along with the German Agency for International Cooperation (GIZ) in Georgia, Germany, Kosovo, and Vietnam, and funded by the German Federal Ministry for Economic Cooperation and Development (BMZ).

On November 17, we conducted a program-based budgeting (PBB) training event with the Ministry of Finance of the Kyrgyz Republic under the Multi-Donor Trust Fund funded project entitled “Improving Program-Based Budgeting and Budget Investment Planning, including Improvements in Sectoral Spending Planning.”

We recently started working on a new project aiming to support Armenia, Azerbaijan, Georgia, Moldova, and Ukraine in shaping future policies, strategies, and capacity-building responses on cybercrime, cybersecurity, and electronic evidence in the near-to-medium-term.

On October 28, we, as a subcontractor of DAI Global, under the Public Financial Management and Administration Activity in Jordan, delivered a presentation about the advantages of Framework Agreements (FAs) to the Government Procurement Department of Jordan. 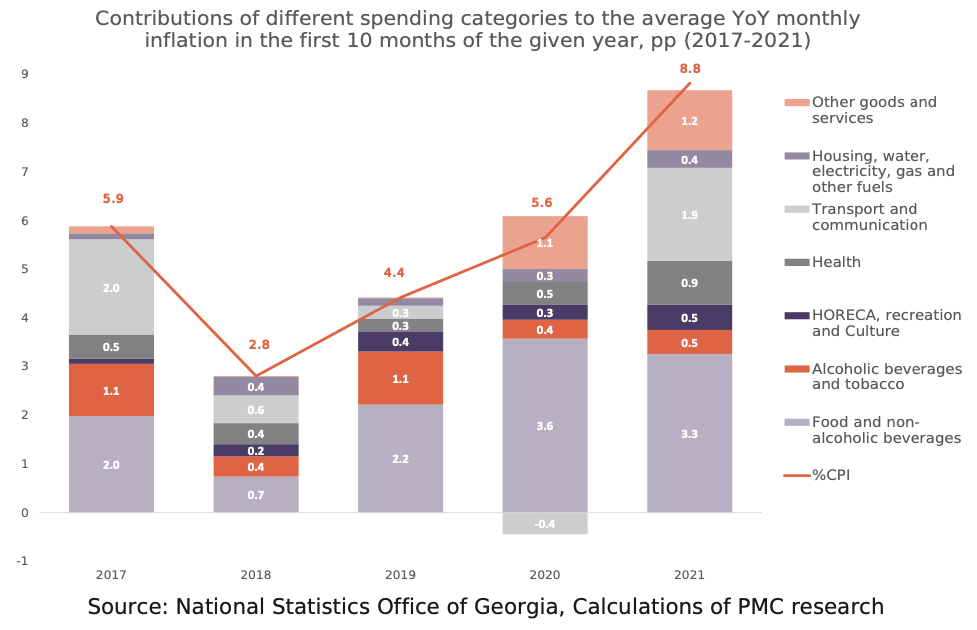 The global economic recovery is ongoing, however the COVID-19 pandemic is still causing considerable volatility. Since the beginning of 2021, inflation rates have increased in both advanced and emerging economies, generally driven by pandemic-related supply-demand mismatches and rapidly rising commodity prices, following a global decline in inflation over the course of 2020. According to the latest forecasts, for most countries upward price pressures are expected to subside with a return to pre-pandemic levels by mid-2022. With this in mind, it is pertinent to compare the inflationary trends of Georgia with global patterns. In Georgia, the year-over-year (YoY) Consumer Price Index (CPI), which measures the average price of goods and services acquired by consumers compared to the reference period, has proved relatively similar to global trends, as in December 2020 the inflation rate showed a significant decline of 4.6 percentage points compared to December 2019, reaching 2.4%, major decrease (25.4 pp) in prices coming from “housing, water, electricity, gas and other fuels” category, which can be explained by the introduction of utility subsidies for households from November 2020 and plummeting global oil prices in the middle of 2020.  This figure was still higher than the lowest figure of the reporting period which was recorded in December 2018 (1.5%). Since the beginning of 2021, monthly YoY CPI inflation has been increasing sharply, surpassing pre-pandemic levels, and reaching its peak to date of 12.8% in October 2021 with a 10 pp increase from the beginning of the year. On the contrary, YoY monthly core inflation increased in the middle of 2020, reaching 6.6% in June 2020 (with significant increases in prices of routine household maintenance, healthcare, and restaurants and hotels) and this has continued to be relatively stable with a monthly average value of 5.8% over the 2020-2021 period, while the pre-pandemic (2017-2019) monthly average was equal to 3.1%. The magnitude of the fluctuations was significantly lower in the case of core inflation compared to CPI inflation, which could be explained by the fact that the most significant price variations have tended to come under the food and energy categories. 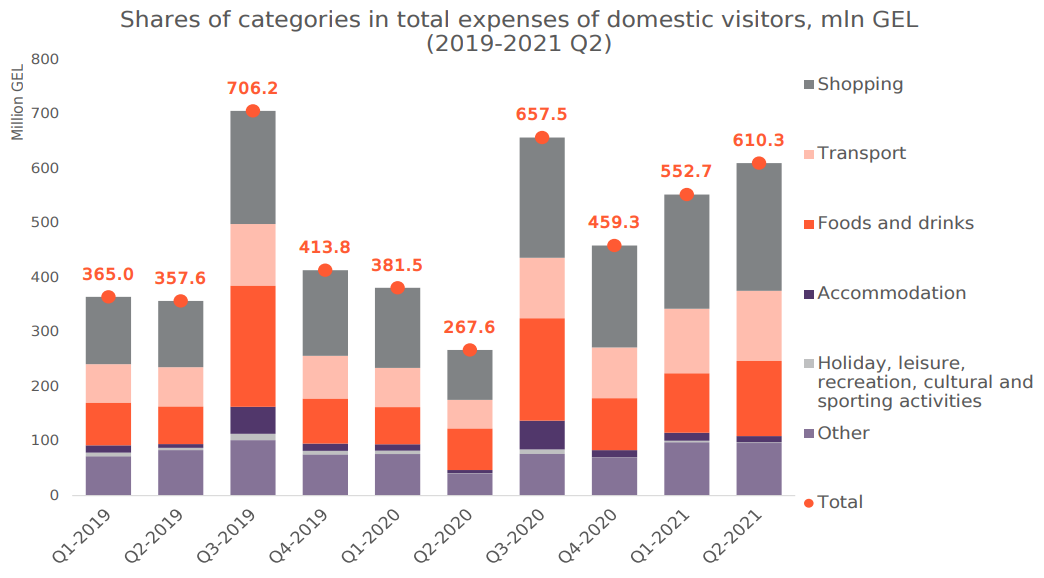 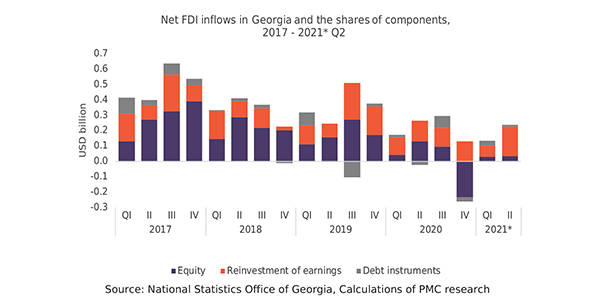 For developing countries, attracting FDI has great potential to serve as a tool to achieve higher economic growth through reducing unemployment, increasing exports, boosting productivity, and improving capital inflows. During the last two decades, Georgia has adopted many reforms to eliminate obstacles in the way of doing business and to attract foreign investors. As a result, Georgia became one of the best performers in the world according to international indices on doing business and openness to investments, and recorded substantial growth in FDI, especially in the period of 2014-2017. However, those reforms have not been sufficient to ensure a prolonged steady inflow of FDI nor have they maximized the potential gains from foreign investment. 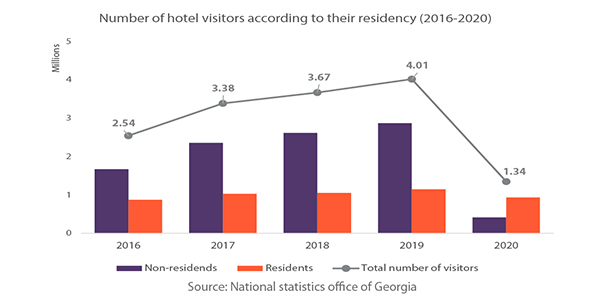 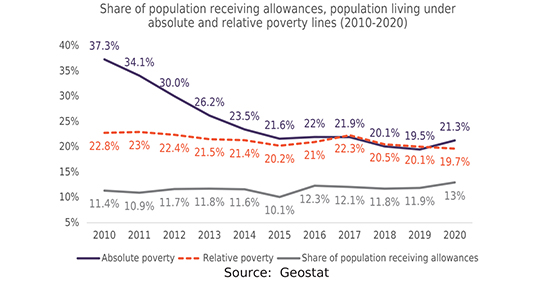 Poverty alleviation remains one of the biggest challenges for the world, including Georgia. Methods applied to determine the poverty rate vary from country to country, so in order to gain a broad understanding of the current situation regarding poverty in Georgia at the international level, it is important to take into account a variety of indicators. In 2020, GDP per capita in Georgia amounted to 4279 USD, ranking it 122nd in the world and 3rd among Eastern Partnership (EaP) countries. Meanwhile, the Human Capital Index (HCI) calculates the contributions of health and education to worker productivity with Georgia scoring 0.57 in 2020, ranking 85th out of 174 countries world and having the lowest score among EaP countries.Multidimensional poverty encompasses various forms of deprivation experienced by poor people such as poor health, lack of education, inadequate living standards, poor quality of work and the threat of violence. In 2019, 3.8% of the population in Georgia was multidimensionally poor, ranking 57th out of 120 countries in the world and first among EaP countries. The Gini Index measures income distribution within a society. In 2021, Georgia scored 36.4 on the Gini Index, ranking 76th out of 165 countries and having the highest inequality rate among EaP countries. In terms of life expectancy, in 2020 average life expectancy in Georgia was 74.2 years, ranking it 101st in the world and 3rd among EaP countries. Taking into account these indicators, Georgia, on an international level, is an upper-middle-income country with moderate rates of inequality and life expectancy. Due to its poor educational and healthcare systems, Georgia has been unable to mobilize its human capital to achieve a higher level of economic development. 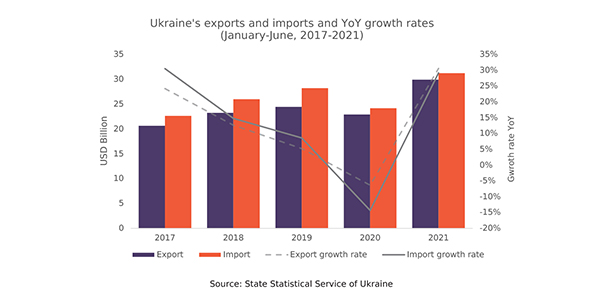 The poultry sector in Georgia enjoyed stable growth between 2007 and 2020 (i.e. since the global outbreak of bird flu had abated in 2006). The sector is the only agricultural sector to contribute VAT payments to the Georgian economy. The sector, as well as most other sectors of the economy, has been affected by the country’s move toward approximation with European standards, especially in recent years. This issue is largely based on the "Poultry Cluster Diagnostic Study in Kvemo Kartli Region," published by PMC Research Center, for United Nations Industrial Development Organization (UNIDO) under the “EU Innovative Action for Private Sector Competitiveness in Georgia (EU IPSC).” Find the full publication here: https://bit.ly/3kSILkL 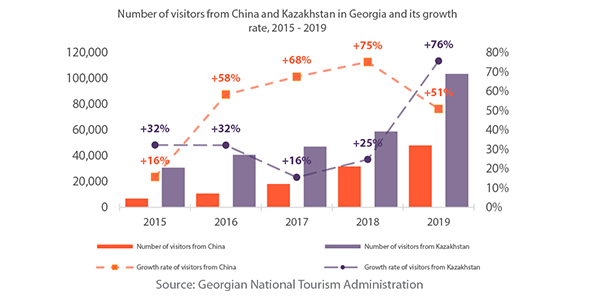 The number of international travelers increased by 538.3% in August 2021, compared to the same period of 2020, and declined by 77.3% compared to the same period in 2019. Meanwhile, the number of international visitors increased by 510.5% (2021/2020) and declined by 75.5% (2021/2019), and the number of international tourists increased by 615.2% (2021/2020) and declined by 67.2% (2021/2019); Tourists coming to Georgia have customarily originated from a small concentrated selection of countries. Specifically, in 2019, 71.4% of all international visitors to Georgia came from its four neighboring countries. However, in August 2021, the corresponding proportion amounted to just 40.8%, mostly due to an increase in the number of visits from Ukraine, Saudi Arabia, Belarus, and Kazakhstan; Targeting tourism markets with potential for expansion could be a fruitful approach in Georgia’s economic recovery as the pandemic eventually subsides. In particular, China, with an average growth rate in its number of visitors to Georgia of 54% over 2015-2019, and Kazakhstan, with a corresponding indicator at 36%, stand out as promising markets.