Despite the difficulties presented by the ongoing COVID-19 pandemic, we continue to grow, both geographically by diversifying our portfolio, and in terms of personnel by adding new high-level professionals to our team. Indeed, we are delighted to announce that Mikheil Janelidze has joined our team as a Senior Consultant in Foreign Trade Policy.

We believe that Mr. Janelidze will contribute to our work significantly, as he brings invaluable expertise in the field of international affairs and economic development with a rich blend of experience in the public and private sector.

While working as Vice Prime Minister and Foreign Minister of Georgia between 2015 and 2018, Mr. Janelidze helped to deepen the country’s ties with the United States, the European Union (EU), Western and Central Asian states, as well as Japan, India and China, resulting in strengthened economic and security cooperation, enhancing Georgia’s economic integration with the largest regional and global economic powers. During this time, Georgia took a lead in the EU’s Eastern Partnership program and strengthened its trade and security ties with the United States and NATO, concluded a free trade agreement with China, launched negotiations on a bilateral investment treaty with Japan, and started exploratory free trade talks with India. Meanwhile, during this period, Georgia also took a leading role in the process of implementing the UN’s Sustainable Development Goal #16, and chaired the Open Government Partnership (OGP).

In 2011-2015, Mr. Janelidze served as Vice Minister of Economy of Georgia and acted as the chief trade negotiator for his country as well. Here, he successfully negotiated the Deep and Comprehensive Free Trade Agreement (DCFTA) with the EU that resulted in the upgrading of Georgia’s trade policies. He also actively participated in the development and implementation of enterprise and SME development mechanisms. During this period, Georgia strengthened its relations with international donors and international financial institutions (IFIs), and augmented investments in sustainable development, clean energy, and transport infrastructure.

"It is a great honor for me to work with the PMCG team. This is a professional team that has gained international recognition in a short period of time. It is important that the organization is growth-oriented, both in terms of markets and its portfolio of services. I hope that our cooperation in the field of trade policy will be successful and will create new opportunities,” said Mr. Janelidze.


To read a more detailed biography of Mr. Janelidze, follow this link: https://pmcg-i.com/ourteam_show/100

We recently became part of a new five-year program in the Maldives, aiming to enhance the quality, efficiency and transparency of managing government budget processes and public investments by strengthening public financial management (PFM) and domestic revenue mobilization (DRM) systems.

We recently started working on a GIZ project designed to share experience and innovative solutions efficiently across regions in the context of the COVID-19 pandemic, so that cities in GIZ’s Connective Cities Network can better prepare for the effects of the pandemic. Moreover, it aims to boost the effectiveness of their responses to local outbreaks.

On November 16, Mr. Mikheil Janelidze, Senior Consultant in Foreign Trade Policy at PMCG, virtually opened the Central Asia Trade Forum (CATF) promoting regional trade and connectivity. The annual event, which is being held for the tenth time, runs until November 20 and is organized by USAID.

We are delighted to welcome Ms. Irina Tserodze to our team as a senior consultant in the field of education and skills development, bringing with her a proven track record of more than 15 years in the public and private sector. 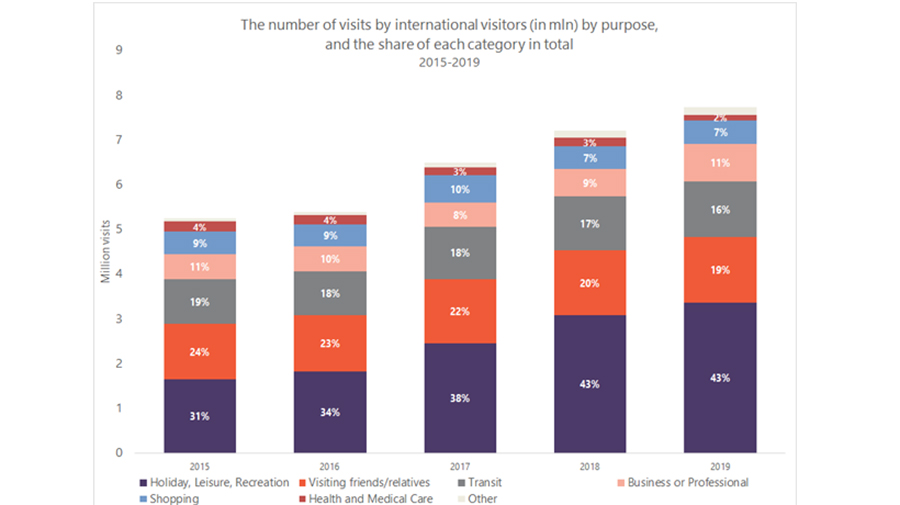 The number of international visitors declined by 92.9% in October compared to the same period of 2019, and the number of international tourists fell by 90%. Georgia experienced a fall of at least 90% in the number of foreign arrivals every month since April 2020, compared to the corresponding period of 2019; The price changes in Adjara and Guria are the most representative of tourism’s decline. In October 2020, the year over year Hotel Price Index decreased by 51% in Guria and by 27.2% in Adjara; The number of international visits to Georgia grew significantly over the period of 2015 to 2019, and this growth was mostly attributable to an increase in the number of visits for holiday, leisure and recreation purposes. However, due to safety concerns arising from the COVID-19 pandemic, the number of visits in this category has been declining significantly, and this trend is likely to continue for the foreseeable future; The number of business or professional visits, despite contributing only a modest share of the total visits, also registered significant growth, as it grew by an average of 11% year-on-year from 2015 to 2019. 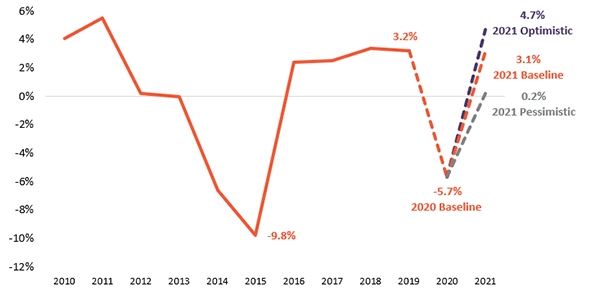 “The Great Lockdown”, referring to the period in which COVID-19 containment measures were put in place worldwide, has had a significant toll on the global economy. In the specific case of Ukraine, even though the country entered the crisis in better macroeconomic condition than in previous global crisis in 2008, its economy is still expected to be hit hard. In this issue, we provide an overview of the impacts of the ongoing pandemic on the Ukrainian economy that are already visible and try to supply an economic forecast for the country for the remainder of 2020 and for 2021, looking at the performance of each economic sector in the process. 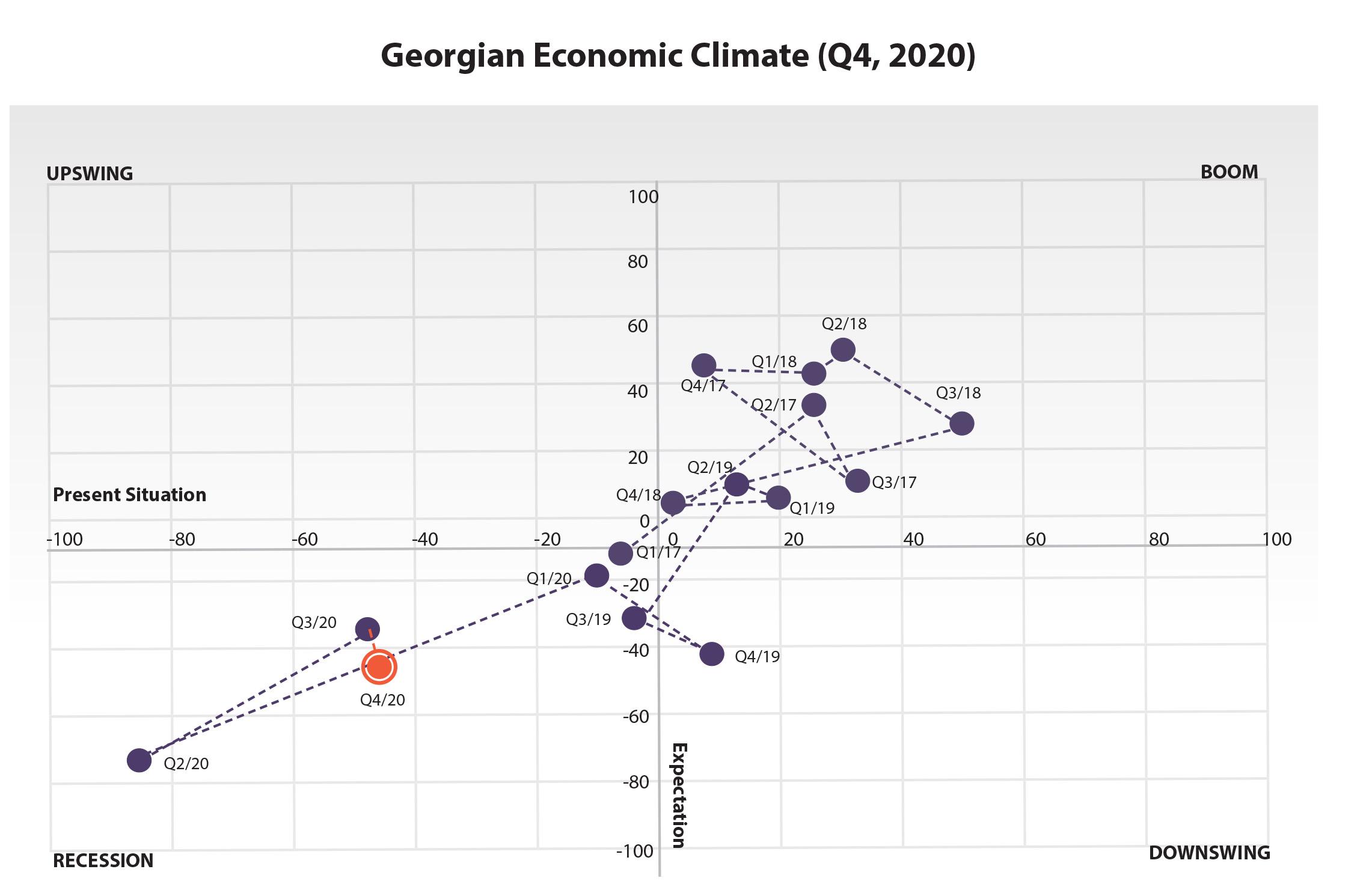 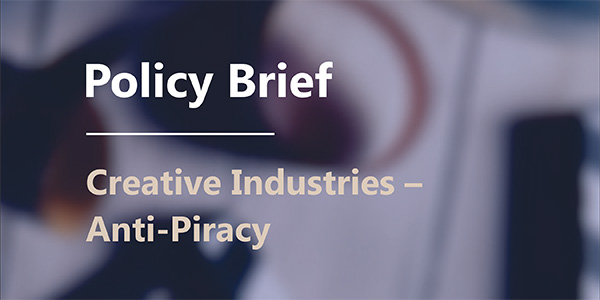 This paper concentrates on the production and post-production (of audiovisual content) value chains within the creative industries sector and aims to facilitate dialogue between private and public sectors on the most critical policy/regulatory challenges. The paper is developed by PMCG under the USAID Economic Security Program.

Issue 124: Overview of COVID-19 in Eastern Europe and Central Asia Including Case Studies of Georgia, Moldova and Serbia 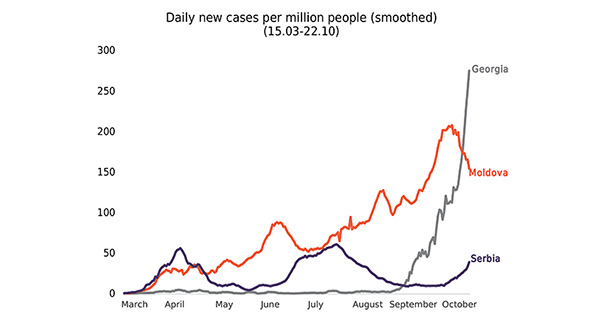 The COVID-19 pandemic, and the ensuing economic shock, has prompted governments all around the globe to act swiftly and decisively to mitigate the health and economic impacts of the crisis. Each country has responded in its own way, and it is useful to look at these different responses to identify good practices. In this issue, we look broadly at countries in Eastern Europe and Central Asia, and present three case studies of Georgia, Moldova, and Serbia respectively, including an analysis of the fiscal measures these countries have taken and an overview of the impacts of the pandemic. 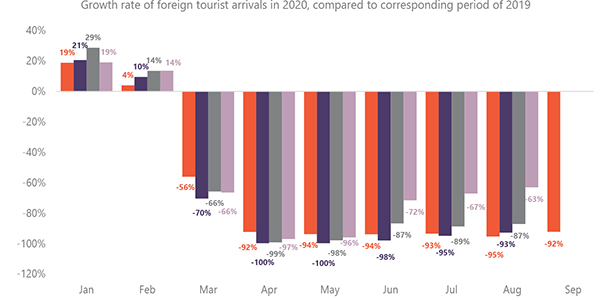 The number of international travelers declined by 94.2% in September compared to the same period of 2019, while the number of inter- national visitors fell by 93.6% and the number of international tourists fell by 92.2%. Georgia experienced a fall of more than 90% in the number of foreign arrivals every month since April, compared to the corresponding period of 2019; In the first three quarters of 2020, revenues from international travel amounted to US$499 mln, which is 81% lower than for the same period of 2019; The price changes in Adjara, Guria, and Samtskhe-Javakheti are the most representative of tourism’s decline. In September 2020, the year over year Hotel Price Index decreased by 39.2% in Guria, 33.4% in Adjara, and 24.3% in Samtskhe-Javakheti; Looking at countries that have reopened tourism quickly with no restrictions, some have managed to recover a sizable portion of their arrivals, such as Albania, while others, like North Macedonia and Serbia, have not been so successful. Indeed, the decrease in the number of arrivals to the latter two countries has been comparable to that in Georgia, which has maintained significant travel restrictions. 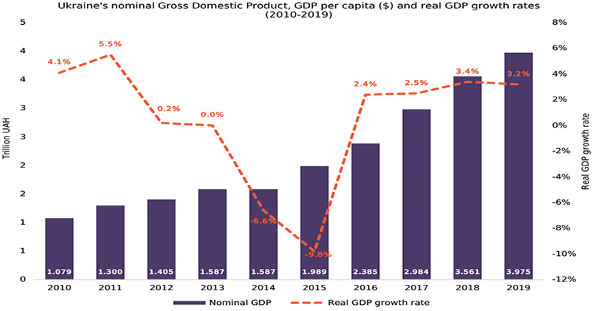 In the very first edition of PMC Research Center Ukraine’s Economic Outlook and Indicators, we present an overview and analysis of the dynamics of Ukraine’s main economic indicators over the last decade, such as GDP, inflation, exchange rates, foreign trade, FDI, and remittances. 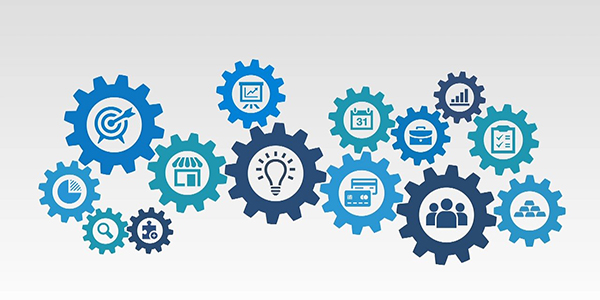 In August 2020, the number of employees receiving salaries recovered almost fully and stood at only 1% less than the corresponding month of last year; During the period of January-August 2020, the month of May saw the largest drop in the number of employees receiving salaries (a dip of 9% or 74 951), compared to the corresponding period of 2019; The month of April experienced the biggest decline in the number of employees for four out of the five higher-income categories, with the highest decline (23%) recorded in the number of people earning more than GEL 4800 per month; The total average monthly earnings of employees in Q2 of 2020 amounted to GEL 1150.1, which represents a 3% decrease compared to Q2 of 2019; According to the data obtained from HR.ge and Jobs.ge, the drop in demand for labor started in March and reached its peak in April, when HR.ge and Jobs.ge experienced an 87% and 78% year over year (YoY) decline in new vacancies posted, respectively. The YoY growth rates started recovering towards the baseline in May, but then registered a significant decline in August.