Bolnisi Municipality is one of the most active members of the Mayors for Economic Growth (M4EG) initiative, supported by the European Union. In June 2017, the municipality joined the initiative and swiftly began the implementation of its Local Economic Development Plan, which had been commended by the World Bank’s technical experts.

The experience of Bolnisi Municipality is an example of best practice in terms of demonstrating how municipalities and mayors can harness EU support to enhance the development of agribusiness and tourism at the local level. Bolnisi has planned and implemented effective changes in its municipality, bringing tangible results for its citizens. It is the first municipality in Georgia to have established an agricultural center, serving as a space where farmers can access mobile services related to local agricultural production, including the packaging of fruit, vegetables, cheese, and meat, and the bottling of wine. This novel platform for business activities supports local winemakers and farmers in the preparation of their products for local and export markets, thereby boosting their competitiveness.

“Bolnisi Agricultural Center is a very special place in the development of small family wineries in our municipality. This center plays a significant role as it provides consultations to novice winemakers on-site as well as in the cellars on how to bottle wine and various other procedures necessary to ensure a final product of the highest quality,” said Guram Avkopashvili, a winemaker in Bolnisi Municipality.

In addition, Bolnisi City Hall keenly assists the local tourism sector by developing relevant infrastructure, through the project “Establishing an Effective Business Platform in Bolnisi,” which is aimed at supporting local business development (3-years project, funded by the EU under the M4EG initiative). Accomplishments of note in this regard include the devising of a marketing strategy for the Katharinenfeld area of Bolnisi , the rehabilitation of one of the municipality’s most historic streets, the conducting of an analysis of the economic potential of the municipality, the founding of an agrocenter.

Bolnisi is one of many municipalities to benefit from the M4EG initiative, which was created in the course of the work of the EU’s Eastern Partnership (EaP), and is oriented toward supporting mayors and municipalities at the local level to work in partnership with businesses and civil society to accelerate economic growth, development, and job creation. The initiative is funded by the EU and is being implemented by PMCG, as part of a consortium led by Ecorys Nederland B.V.

PMCG, as part of a consortium led by B&S Europe under the EU’s SIEA Framework Contract Lot 3, together with Evoluxer S.L., has recently started working on a mid-term evaluation of ten projects, conducted by the EU during 2017-2020 concerning comprehensive reform of public administration in Ukraine.

On July 9, Georgia’s Digital Transformation Consortium, initiated by Georgia’s large- and medium-sized IT and consulting companies and serving as an open and collaborative platform based on a public-private partnership model, was signed by about 40 representatives of the IT industry, consultants, academics, and industry associations at Georgia’s Innovation and Technology Agency (GITA).

We are working to contribute to the promotion of equal-opportunity access to employment and relevant skills training for both women and men under the European Bank for Reconstruction and Development (EBRD) Bakuriani Municipal Services Project - Inclusion & Gender Consultancy.

On July 1, PMC Research presented the findings of the Value Chain Analytics project being implemented in the course of the USAID Economic Security Program in Georgia.

We recently launched a new project, aiming to strengthen knowledge and capacities regarding the design and implementation of free trade agreements (FTAs) of all countries of the Central Asia Regional Economic Cooperation (CAREC) program, which represents a partnership of 11 countries (Afghanistan, China, Azerbaijan, Georgia, Kazakhstan, Kyrgyzstan, Mongolia, Uzbekistan, Turkmenistan, Pakistan, and Tajikistan) and development partners working together to promote development through cooperation, leading to accelerated economic growth and poverty reduction, guided by the overarching vision of “Good Neighbors, Good Partners, and Good Prospects.” 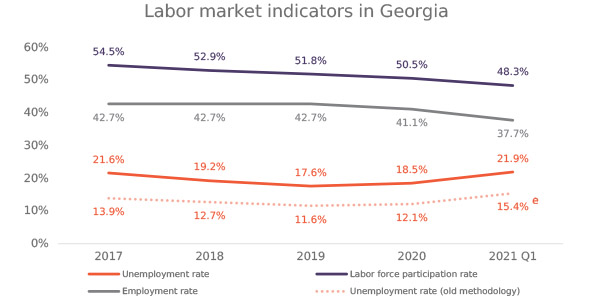 In 2021, unemployment remains an unresolved obstacle for the Georgian economy and society’s most pressing problem. Over the years, diverse public opinion polls have indicated that unemployment is the most important issue at national level. For instance, in 2020, according to a public attitudes poll conducted by the National Democratic Institute, for 46% of respondents, the main challenge they were facing was unemployment.This issue focuses on changes in unemployment trends in Georgia in the period of 2017-2020 and provides an analysis of the effects of the COVID-19 crisis on unemployment in the country. 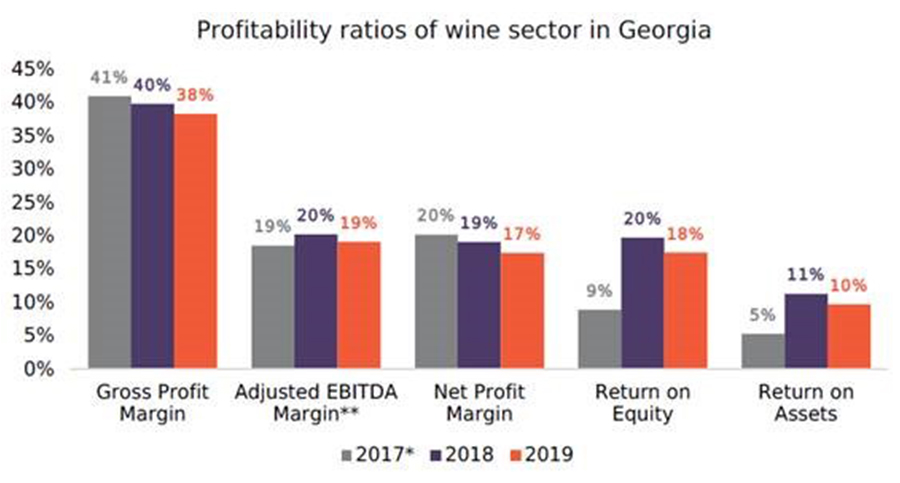 The wine industry in Georgia has experienced strong growth over the past decade in all key indicators such as exports, turnover, and employment and salaries (measured both in GEL and in USD). The financials of the sector have also looked impressive during this time. 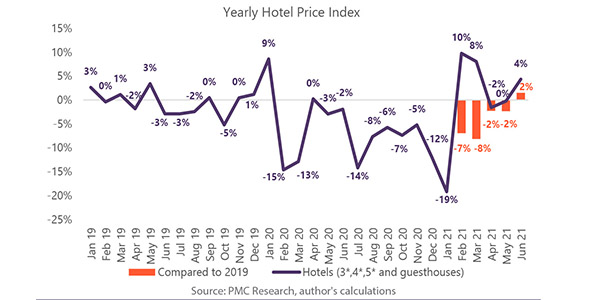 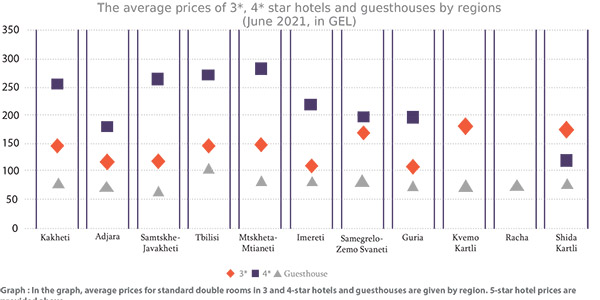 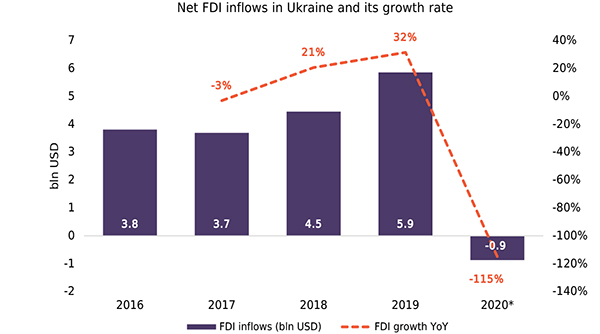 The COVID-19 pandemic and the subsequent Great Lockdown have affected investment flows all over the globe, especially in emerging markets. According to UNCTAD, global Foreign Direct Investment (FDI) flows dropped by 35% in 2020, to $1 trillion, from $1.5 trillion in 2019. This is almost 20% below the 2009 levels after the global financial crisis. Moreover, the number of newly announced greenfield projects in developing countries declined by 42% in 2020 compared to 2019. To assess the impact of the crisis on the FDI flows in Ukraine, it is crucial to have a snapshot of the pre-crisis situation along with developments in 2020. 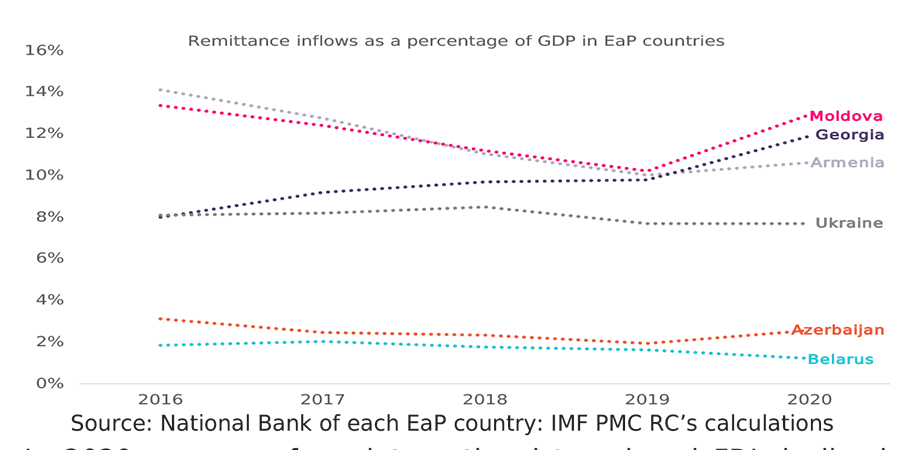 This bulletin focuses on remittance inflows into Georgia in 2020 and its development in 2021. The social and economic stability of Georgia strongly relies on the money sent from emigrants to their families. Based on World Bank Data, in 2019, in terms of dependence on remittance inflows, Georgia ranked 21st in the world, with remittance inflows to GDP ratio. Moreover, the study conducted by the State Commission on Migration Issues revealed that in 2016 money sent by every second emigrant to their families accumulated half or 3/4 of family budget, and for the 15% of families remittance was the only source of income in Georgia. The COVID-19 pandemic and imposed restrictions hindered economic activity in nearly every country, resulting in a negative effect on wages and employment for migrant workers and consequently, drying up of remittance inflows. In 2020 due to the emerged crises and uncertain situation, the World Bank projected shrinking remittance flows for low and middle-income countries by 7.2%3, while the IMF forecasted a 15%4 decline for Georgia. However, despite the crisis and pessimistic predictions in Georgia, the volume of remittance inflows in 2020 compared to 2019 has increased by 8.8% and reached the highest figure in the past decade - 1.9 BLN USD, amounting to 11.9%, expressed as a percentage to GDP. 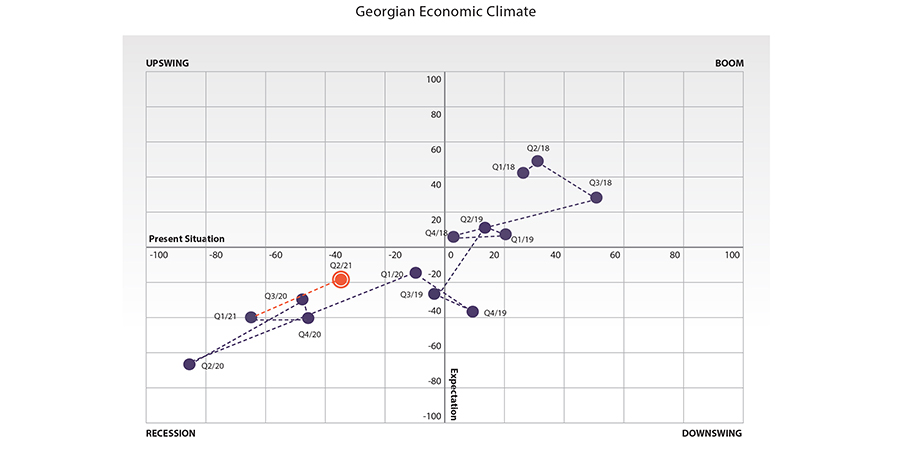 According to this survey of Georgian economists, the economic climate in the country in the second quarter of 2021 is better than the first quarter of the same year. Georgian economists’ assessment of the current situation has improved, compared to the previous quarter and corresponding quarter of 2020, but nevertheless remained negative. The economists’ predictions for Georgia’s economic situation for the next six months were also negative. Their expectations for this period improved though, compared to their predictions in the first quarter of 2021, and were considerably more optimistic than the forecasts they made at the same time last year. 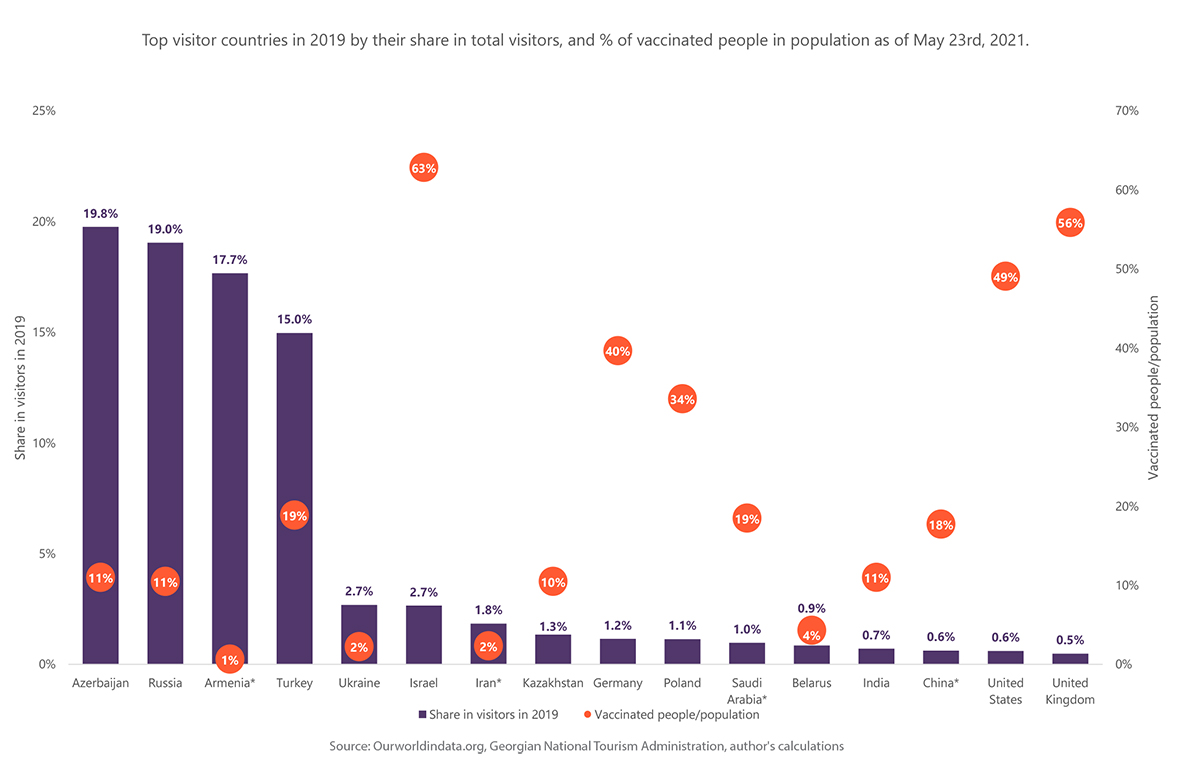 The research objectives are to examine the challenges that exist in the civil servants’ professional development system, in general, explore barriers specifically associated with the shift to online learning, assess the readiness of civil servants for online training, and develop recommendations to increase the effectiveness of remote teaching.The research methodology is based on a mixed-method design and combines qualitative and quantitative approaches: analysis of the existing documents, interviews with key informants, focus group discussions, and a computer-assisted telephone survey that is representative for professional civil servants working in the councils and town halls across the country. In order to provide in-depth analysis of the issue, the research draws on the perspectives of multiple stakeholders, including civil servants as well as representatives of the Civil Service Bureau, international organizations, and training centers.