On April 23, Aleksi Aleksishvili, CEO and Chairman of PMCG, participated in a virtual panel, which was organized by the Middle East Institute (MEI) and was dedicated to analyzing the economic shocks of the Covid-19 pandemic on the states of the South Caucasus and the Caspian Basin.

The panel “Economic shocks of COVID-19: What next for the Caspian Basin and South Caucasus?” was moderated by Alex Vatanka, Senior Fellow and Director of the Iran Program at the MEI, and also included Rauf Mammadov, Resident Scholar on Energy Policy at the MEI, and Suzanne Maloney, Interim Vice-President and Director of the Foreign Policy Program at Brookings Institution. The aim of the panel was to identify decisive actions that could be taken by leaders and international partners in the relevant region in order to avoid sharp economic contractions in 2020.

“For the time being, various actions are being taken by the governments of the region to manage this economic crisis, nevertheless the immediate support from bilateral and multilateral development institutions plays an exceptional role in recovering the economy,” said Mr. Aleksishvili.

During the panel, Mr. Aleksishvili analyzed the current crisis’s development in the South Caucasus states, discussed the immediate economic steps being implemented by the respective governments of these three states, and assessed the potential economic implications of the crisis and associated restrictions.

The general economic climate in the South Caucasus and Caspian Basin, like most of the world, is highly vulnerable to Covid-19 and is particularly susceptible to the sudden drop in oil price. The economies of these states are challenged not only by the direct effects of Covid-19, but also indirectly by the impact on Iran, which in recent years has been serving as a regional trade driver and an economic integrator in its immediate neighboring states, including the countries of South Caucasus and the Caspian Basin. However, as the Iranian economy starts to feel the full force of the crisis, its policy with regard to other states in its neighborhood appears uncertain.

Please kindly follow the link below for detailed information about the panel:
https://www.youtube.com/watch?v=GfUMK3pnYxY

We recently started collaborating with Gori City Hall with the purpose of enhancing the resilience of its system against corruption, in line with the 2020-2025 Decentralization Strategy of Georgia, the national anticorruption framework and an OECD recommendation.

PMCG Assisted the EU to Enhance its Communication in Ukraine

We recently assessed the outcomes of the action “Communicating Europe in Ukraine (CEIU)” and delivered a strategic vision, intended to ensure more effective and sustainable communication of the European Union (EU) in Ukraine.

Meet Our New Consultant in Energy, Environment and Finance Management

We are delighted to welcome Mr. Roni Kvatchadze, a professional with 10 years of experience in public and non-governmental sectors, to our team as an Energy, Environment and Finance Management Consultant.

We are pleased to announce the arrival of Shalva Khutsishvili to our team, as our Senior Consultant in the field of public security. We extend a warm welcome to Mr. Khutsishvili, who brings with him more than 17 years of sound experience of working in the public sector and of collaboration with international development institutions.

The year of 2019 proved to be a busy one, with opportunities grasped and challenges overcome. We implemented various interesting projects, each of which made a telling impact. Meanwhile, as existing partnerships were strengthened, we established exciting new ones as well. Specifically, we made notable strides forward in Ukraine where we increased our representation and intensified our work. Finally, and perhaps most importantly, our excellent team has been complemented by the addition of new people with diverse and invaluable expertise. 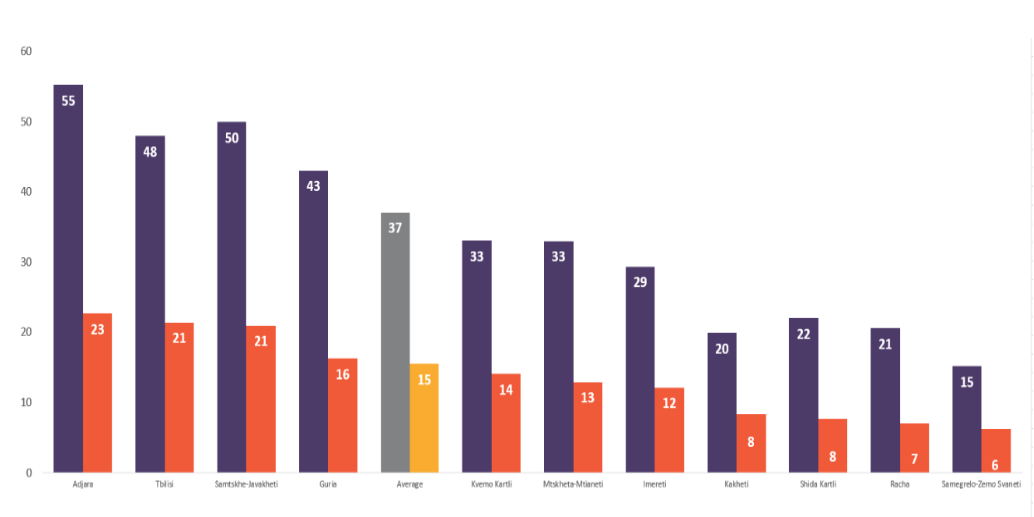 Number of international travelers decreased by 612 273 (-94.5%), compared to the same period previous year, while number of visitors decreased by 515 440 (-93.8%) and the number of tourists decreased by 321 643 (-92.3%); Based on GNTA database, in an average registered accommodation facility in Georgia, there are 15 rooms and 37 beds. There are on average 23 rooms and 55 beds in Adjara (highest) and 6 rooms and 15 beds in Samegrelo-Zemo Svaneti (lowest). There are on average 2.4 beds per one room in Georgia. This ratio equals 2.24 in Tbilisi (lowest) and 2.91 in Racha (highest);  Hotel prices do not provide an accurate guide of situation in accommodation market due to the fact that the market for accommodations is almost non-existant due to the COVID-19 pandemic

Budget Guide for Members of Parliament of Georgia 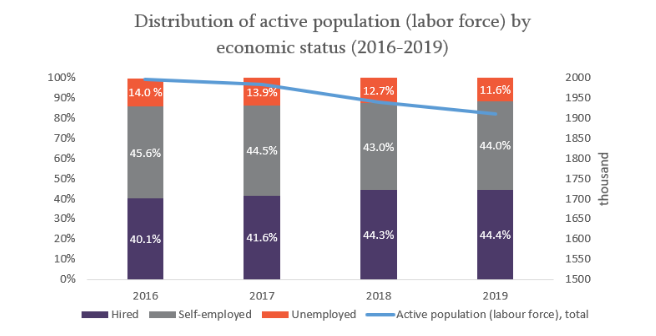 Unemployment has remained one of the prioritised issues in Georgian economy since its independence. Moreover, Georgian economy was characterised with high unemployment rates even during periods of economic upturn prior to 2008 global financial crisis. COVID-19 is likely to impact job market and income of people employed, therefore, it is important to consider their pre-pandemic state. This bulletin overviews the unemployment and income figures of 2016-2019. The period of 2016-2019 is characterised with significant trends and issues such as: • Growth in average monthly incomes;• Slight decrease in unemployment rate;• Increased share of hired individuals in labor force;• Slight decrease of share of self-employed individuals in labor force.

PMC Research forecasts that budget deficit as a % of GDP will increase from 3.1% to 9.8% in the optimistic scenario, while in the less pessimistic and very pessimistic scenarios it will amount to 11.2% and 14.1%, respec­tively.                                         Recommendations: Planned budget spending should be reprioritized to provide space for COVID-19-related expenditure; Fiscal measures should be targeted to assist the hardest-hit households and firms. The government should ignore lobbying pressure from different sectors and businesses seeking benefit from fiscal policy package; Effective public financial management is key to safeguarding against fiscal risks and enhancing the Government’s capacity to respond to the crisis.

Issue 116: The Impact of COVID-19 on the Georgian Economy 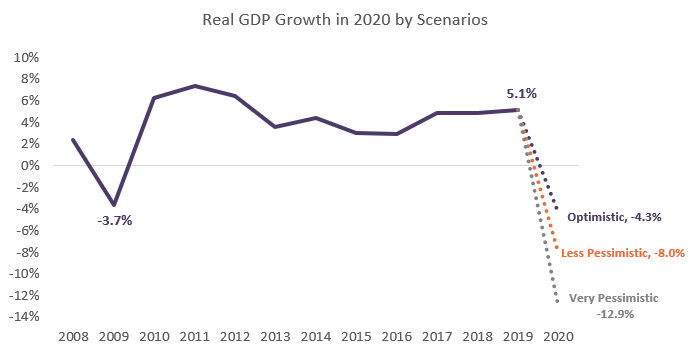 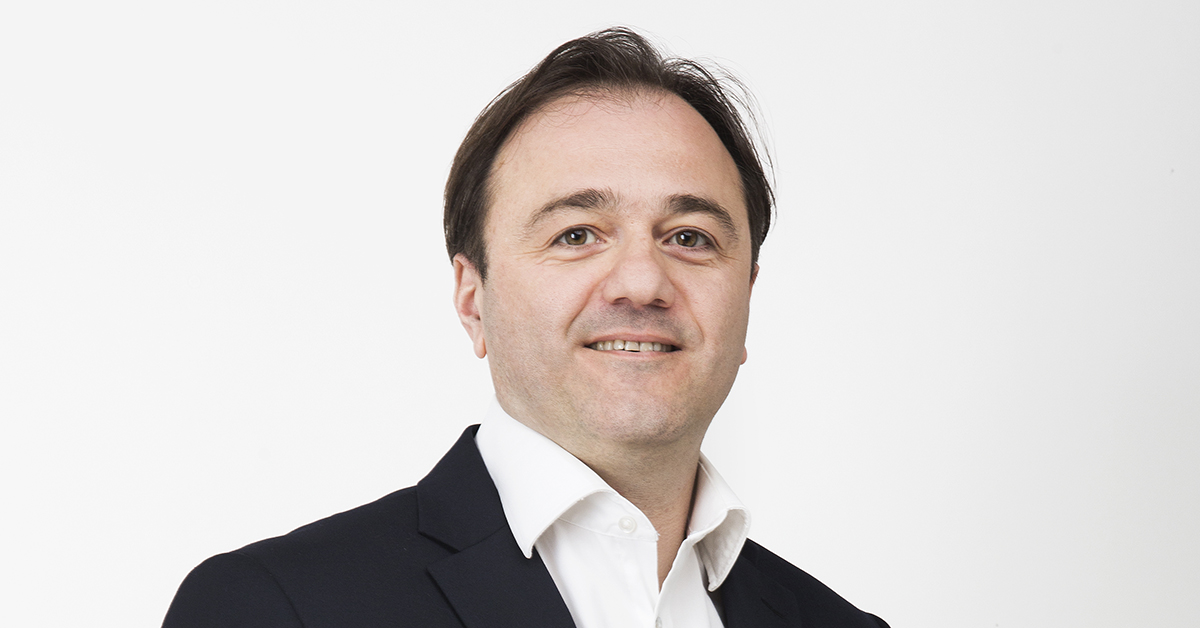 Interview with Aleksi Aleksishvili, Chairman and CEO at PMCG about the most important components, necessary to successfully introduce reforms for World Review magazine, published by Diplomat and the New York Times. 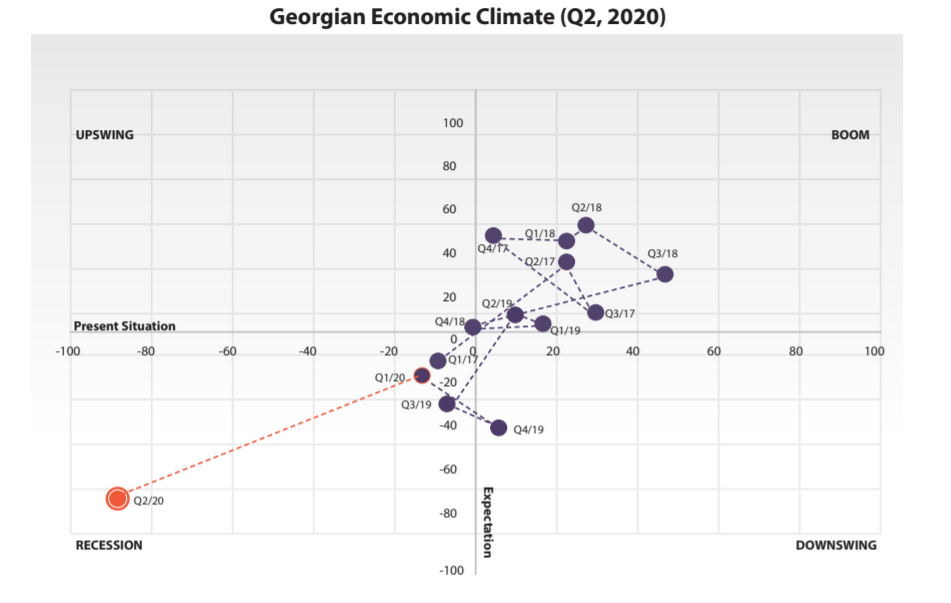